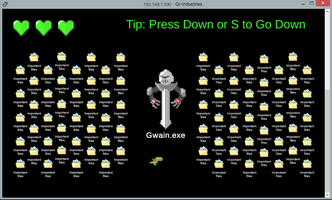 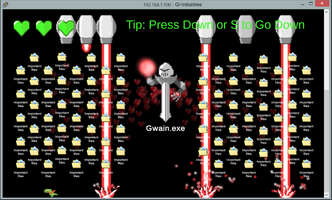 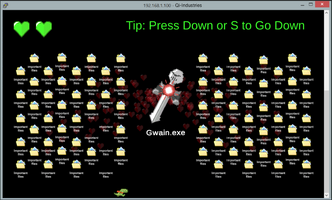 Those wiser than I have recommended I start writing updates to my game development.

This game started off as a simple 3 level game made for my friends, based off an RP story we had come up with together. The reception was so good that I wanted to continue development. Naturally, I drew inspiration from our RP story and came up with a new boss.

Please allow me to introduce Gwain, a counter virus program designed for offensive capabilities against our little Dino virus friend.

Gwain was described in our story as being the program/robot that took the form of weapons. This made his design choice obvious. He had to look like a sword. I'm relatively new to pixel animation, but I managed to make a decent clip of the boss taking the full form of a sword to charge at the player. He is also capable of raining lasers from above to kill the player.

This boss is not officially part of the game yet, but if you would like to check out the boss fight enter code:

to access his solo boss fight. If you do decide to take a look, please let me know what you think!

Like I said before, I'm not experienced with creating pixel art, but I'm pretty proud of how it turned out. The animation was actually not too difficult. I'm using Clip.Studio which has a built in Animation program for 10 second Clips, so I was able to mess around with it before importing it to Unity.

The most difficult coding problem I had was getting Gwain to rotate, pointing his point at the player. When I got it to work, it didn't feel like a smooth movement. Gwain would snap lock on to the player in sword mode and then snap back to its original position before returning to the center. After a bit of google searching I managed to make the movement more fluid.

The other challenge had to come from the laser beam. Having it fire when I wanted to wasn't an issue, but the  putting the "impact sprite" where I wanted it proved difficult. I could have easily just set a position for it to spawn, but I wanted to make it consistent in case I wanted to move the lasers to different heights, or even move them sideways. I ended up figuring out an equation to get it where I wanted every time (pseudo code: spawnPoint = otherCollider.y+ halfColliderHeight + halfLaserImpactHeight).

Up next, I'm working on a new boss fight against Lancelot, the Shield program. We'll see where it goes from there!

Mr. Chompers is Hungry. Eat all the tasty data!